Antonin Dvorak was basically a rock star. So much so that some computer keyboards were named after him.

Dvorak was an early musical talent and made quick gains on the violin upon beginning his studies at age 5. He studied at the only organ school in Prague and later became accomplished on the violin and viola. He played in the Bohemian Provisional Theater Orchestra until 1871 when he began composing.

In 1871 he wrote the song cycle “Cypress Trees” to woo one of his students, Josefina Cermakova. He ended up marrying her sister Anna instead since Josefina married another man. Dvorak had 9 children.

Dvorak began being recognized as an important composer in the early 1870s. He received an honorary degree from Cambridge and directed the National Conservatory of Music in NY from 1892 to 1895. He wrote Symphony No. 9 “From the New World” in winter and spring of 1893 and returned to Europe in 1895. He later directed the Conservatory in Prague until he died in 1904.

He wrote 9 symphonies, a set of symphonic poems, concerti, several operas and was greatly influenced by composers such as Smetana, Wagner and Brahms, who was the most influential for him. Brahms and Dvorak became friends after Dvorak won a composing competition three years in a row. Brahms was a judge at the competition. After the two became friends, Brahms had tremendous influence on Dvorak’s work. Brahms contacted the European publisher Simrock on behalf of Dvorak, and the following year a few of Dvorak’s works were published and became very successful. These included the Serenade for Strings, 5th Symphony, String Quartet No. 2 and Piano Trio No. 1.

Most of the Dvorak photos I found were either incredibly pixelated, or were of Dvorak keyboards. Composers first, keyboards second. Okay? Additionally I came across some strange images: Czechoslovakia (prior to becoming the Czech Republic) released a Dvorak coin. Way to represent! 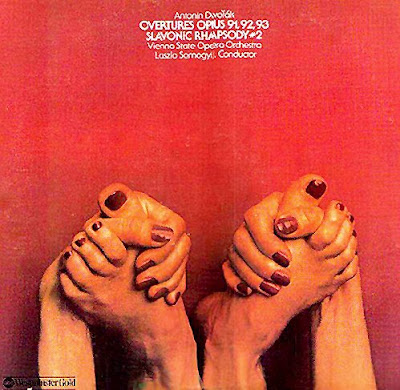 A couple great Dvorak pieces to listen to: