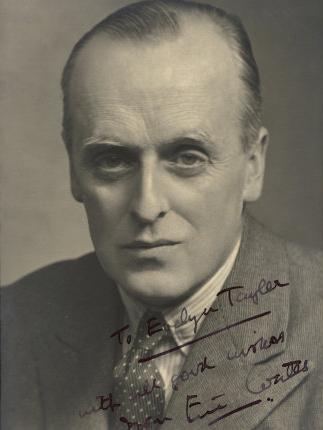 Sometimes you just gotta have some light music. For the times when all you want is a simple, happy, classic Hollywood-esque melody, Eric Coates is all you need. Really.

Eric Coates studied violin and viola as a child and went on to study viola at the Royal Academy of Music. He performed as a principal violist with the Queen’s Hall Orchestra. In addition to being a fabulous violist, he won a competition amongst his fellow musicians to determine who could memorize and perform an entire score the fastest. Well, okay then!

From 1919 on, Coates composed exclusively. He largely wrote waltzes and marches and had no interest in writing more complex works. He established relative popularity in Europe and his works were used to introduce a number of British radio shows, including Desert Island Discs, which still airs today.

Someone once said that the marches of Souza would make a man with a wooden leg step out; a man would have to have a wooden heart not to respond to the music of Eric Coates. –Sir Charles Groves, conductor

By the Sleepy Lagoon. So lovely!