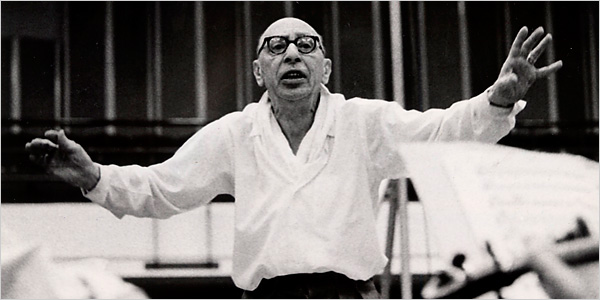 Once again the world is aflutter with all things Stravinsky. This time we celebrate his birthday! We’ve shared Stravinsky quotes and trivia, discussed his affection for armpit farts, his feelings on being sea drunk, and his groundbreaking Rite of Spring.

An entry from The Writer’s Almanac, in honor of his birthday:

“It’s the birthday of the avant-garde composer Igor Stravinsky (1882), born in Oranienbaum, near St. Petersburg, Russia. His first major success as a composer was a ballet based on a Russian folk tale, called The Firebird (1909). It was wildly popular, and he traveled all over Europe to conduct it. He then got an idea for a ballet about a pagan ritual in which a virgin would be sacrificed to the gods of spring by dancing herself to death. Stravinsky composed the piece on a piano in a rented cottage, and a boy working outside his window kept shouting up at him that the chords were all wrong. When Stravinsky played part of the piece for director of the theater where it would be performed, the director asked, “How much longer will it go on like that?” Stravinsky replied, “To the end, my dear.” He titled the piece The Rite of Spring. At its premiere in 1913 in Paris, the audience broke out into a riot when the music and dancing turned harsh and dissonant. The police came to calm the chaos, and Stravinsky left his seat in disgust, but the performance continued for 33 minutes and he became one of the most famous composers in the world.”